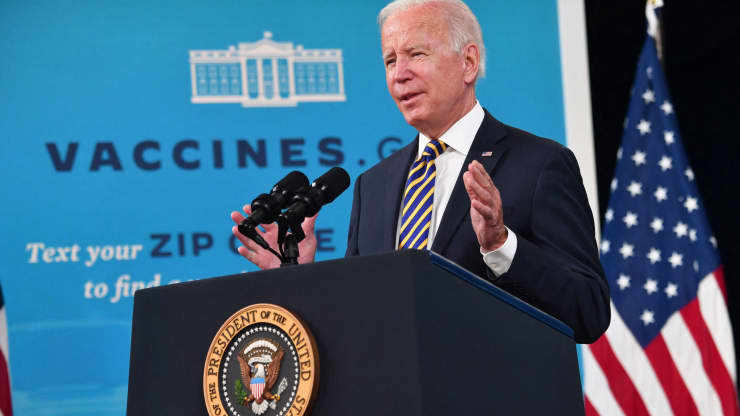 Worried that President Joe Biden’s Covid vaccine mandate for private companies could cause a mass exodus of employees, business groups are pleading with the White House to delay the rule until after the holiday season.

White House officials at the Office of Management and Budget held dozens of meetings with labor unions, industry lobbyists and private individuals last week as the administration conducts its final review of the mandate, which will require businesses with 100 or more employees to ensure they are vaccinated against Covid or tested weekly for the virus. It is estimated to cover roughly two-thirds of the private sector workforce.

OMB officials have several meetings lined up Monday and Tuesday with groups representing dentists, trucking companies, staffing companies and realtors, among others.

The American Trucking Associations, which will meet with the OMB on Tuesday, warned the administration last week that many drivers will likely quit rather than get vaccinated, further disrupting the national supply chain at time when the industry is already short 80,000 drivers.

The trucking association estimates companies covered by the mandate could lose 37% of drivers through retirements, resignations and workers switching to smaller companies not covered by the requirements.

“Now placing vaccination mandates on employers, which in turn force employees to be vaccinated, will create a workforce crisis for our industry and the communities, families and businesses we serve,” Chris Spear, the association’s president and CEO, wrote in a letter to the OMB last Thursday.

Retailers are also particularly concerned the mandate could trigger a spike in resignations that would exacerbate staffing problems at businesses already short on people, said Evan Armstrong, a lobbyist at the Retail Industry Leaders Association.

“It has been a hectic holiday season already, as you know, with supply chain struggles,” Armstrong told CNBC after a meeting with White House officials last Monday. “This is a difficult policy to implement. It would be even more difficult during the holiday season.”

Thirty percent of unvaccinated workers said they would leave their jobs rather than comply with a vaccine or testing mandate, according to a KFF poll published last month. Goldman Sachs, in an analysis published in September, said the mandate could hurt the already tight labor market. However, it said survey responses are often exaggerated and not as many people will actually quit.

The Occupational Safety and Health Administration delivered its final rule to the OMB on Oct. 12, and the mandate is expected to take effect soon after the agency completes its review.

The National Retail Federation, the trucking association and the retail leaders group are asking White House officials to give businesses 90 days to comply with the mandate, delaying implementation until late January at the earliest.

The Business Roundtable told CNBC it supports the White House’s vaccination efforts, but the administration “should allow the time necessary for employers to comply, and that includes taking into account employee retention issues, supply chain challenges and the upcoming holiday season.”

The U.S. Chamber of Commerce, which met with the OMB on Oct. 15, also asked the administration to delay implementing the rule until after the holiday season. Officials at the OMB declined to comment on the implementation period.

However, former officials at OSHA, which will enforce the mandate, told CNBC that businesses will likely have some time to implement the rules.

Jordan Barab, deputy assistant secretary of OSHA during the Obama administration, said the administration will probably give businesses about 10 weeks, as they did for federal contractors, until employees have to be fully vaccinated.

Related Topics:bidencovidvaccineVaccine Mandate
Up Next