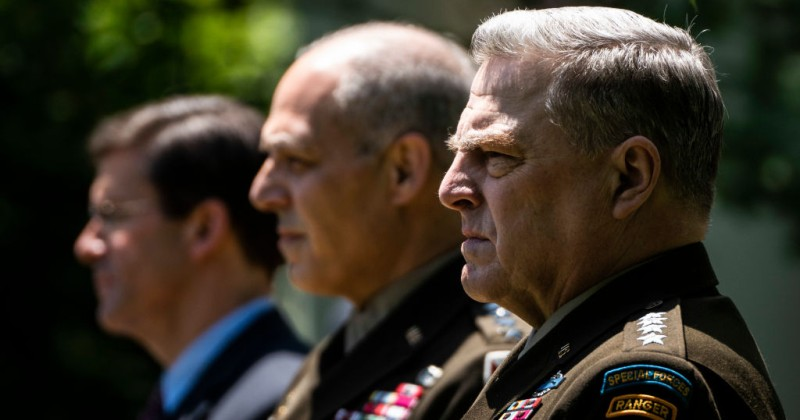 Chairman of the Joint Chiefs of Staff, General Mark Milley, tried to downplay the 2020 Black Lives Matter riots in an effort to prevent Donald Trump from invoking the Insurrection Act, arguing that they were mainly centered around the use of “spray paint.”

That’s according to the new book, ‘Peril’, written by Bob Woodward and Robert Costa.

Despite the violent demonstrations quickly spreading across the country, Milley continued to insist that they had only impacted two cities and were relatively sedate, echoing CNN’s ludicrous “fiery, but most peaceful” description of the riots.

Milley apparently told Trump that most of the riots only involved around 300 people and that they paled in significance to the 1968 Washington riots caused by the assassination of MLK and the Battle of Fort Sumter in 1861, which started the Civil War.

The riots took mere days to spread to virtually every major city in the country, with looting, arson and violent attacks becoming commonplace, eventually causing around $2 billion dollars in property damage as well as at least 19 deaths and over 17,000 arrests.

At one point, demonstrators took over an entire area of downtown Seattle, completely obliterating official law and order for a number of weeks.

Trump’s failure to act strongly and decisively led to him looking weak, derailing a lot of momentum he would have had going into the election.

According to other reports, Trump wanted to invoke the Insurrection Act and put Milley in charge of National Guard troops to end the unrest, leading the two to have a shouting match where Milley refused to take charge.

Video: Inside Edition Finds That Majority Of NYC Restaurants Are Not Enforcing Vaccine Passport Mandate