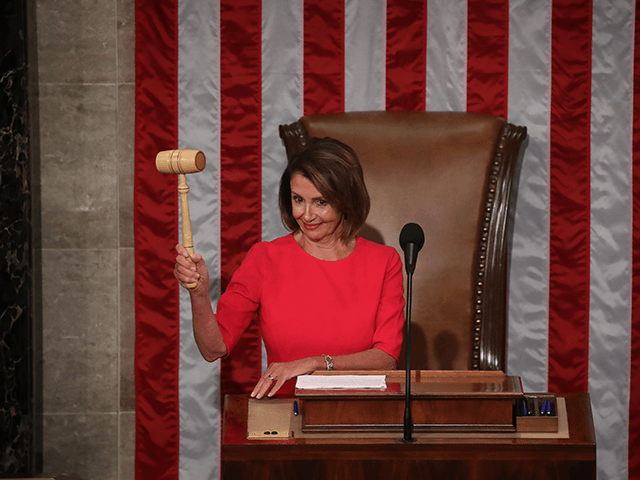 Pelosi delivered her speech after the House of Representatives elected her to lead the House; however, Pelosi enters the 117th with a slimmer majority, giving her less leverage against House Republicans. Further, Pelosi reportedly failed to secure a majority of House representatives to vote for her for Speaker.

Pelosi thanked Democrats for the “confidence” they placed in electing her Speaker.

The California Democrat also expressed praise in serving as Speaker “of the most diverse House of Representatives in the history of our country, with a record-shattering 122 women.”

Pelosi said that now “is certainly a time for our nation to heal” and noted that the House’s most “urgent priority will continue to be defeating the coronavirus. And defeat it, we will.”

Pelosi said that many of the country’s essential workers come from “communities of color and low wealth” and that we “must be there for them.”

She said that the House of Representatives will pursue economic, racial, and environmental justice during the 117th Congress.

To build back better in a way that advances justices in America. Indeed the pandemic has pulled back the curtain on and showing and even worsened the disparities in our society. We must pursue justice, economic justice, justice in health, racial justice, environmental and climate justice; the list goes on.

Rep. Rosa DeLauro (D-CT), who will chair the House Appropriations Committee in January, said in December that the Hyde Amendment is a “discriminatory policy” because, allegedly, many minority women lack the funding to pay for an abortion.

Rep. Jim Banks (R-IN) noted that should Democrats successfully eliminate the Hyde Amendment, then American taxpayers would be funding abortions.

Dinesh D’souza, Leftists Keep Calling Me a “Grifter,” But If That Was True, I’d Be a Leftist, Not Conservative.