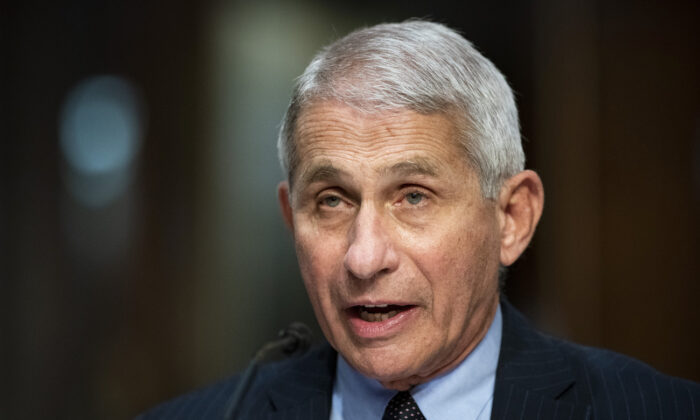 A bipartisan group of U.S. lawmakers are demanding answers from top infectious disease expert Dr. Anthony Fauci about reports that an institute under his leadership funded “cruel” drug toxicity experiments in dogs.

Documents show that NIAID spent $1.68 million in taxpayer funds for animal experimentation. The tests were conducted between October 2018 and February 2019 at SRI International, a research group headquartered in Menlo Park, California.

The experiment involved injecting and force-feeding 44 beagle puppies between six and eight months old with an experimental drug for several weeks, before killing and dissecting them. There also was experimentation on mice.

The documents (pdf) were obtained via a Freedom of Information Act request by the White Coat Waste Project, a nonprofit government watchdog. The watchdog said that this marks the fourth experiment on beagles funded by NIAID that it has been able to uncover.

The House members, led by Rep. Nancy Mace (R-S.C.), called the experiment “unnecessary” in their letter to Fauci (pdf) on Oct. 21.

“While documents state that the ostensible purpose of this study was to ‘provide data of suitable quality and integrity to support the application to the U.S. Food and Drug Administration (FDA) and other regulatory agencies,’ the FDA itself has recently stated that it ‘does not mandate that human drugs be studied in dogs,’” they told Fauci.

The lawmakers also expressed horror at a procedure used in the experiment. They noted that an invoice to NIAID involved an item called a “cordectomy,” also known as devocalization or de-barking. The procedure involves slitting a dog’s vocal cords to remove its ability to bark, howl, or cry.

“This cruel procedure … seems to have been performed so that experimenters would not have to listen to the pained cries of the beagle puppies,” the 24 legislators said. “This is a reprehensible misuse of taxpayer funds.”

They asked Fauci, “Why has NIAID contracted for cordectomies when they appear to be scientifically and medically unnecessary? What is the average cost for each cordectomy performed?”

Lawmakers are also asking how many drug experiments involving dogs have been funded by NIAID since January 2018 and how much taxpayer funding has been used.

They are also asking why the NIAID continued to fund testing involving dogs when the FDA has said such tests aren’t required. “What has NIAID done to explore the use of non-canine and non-animal alternatives to meet FDA requirements?” they said.

Irish city with 99.7 percent vaccinated over 18 has highest rate of Covid-19

Some colleges put new vaccine mandates in place — for the flu