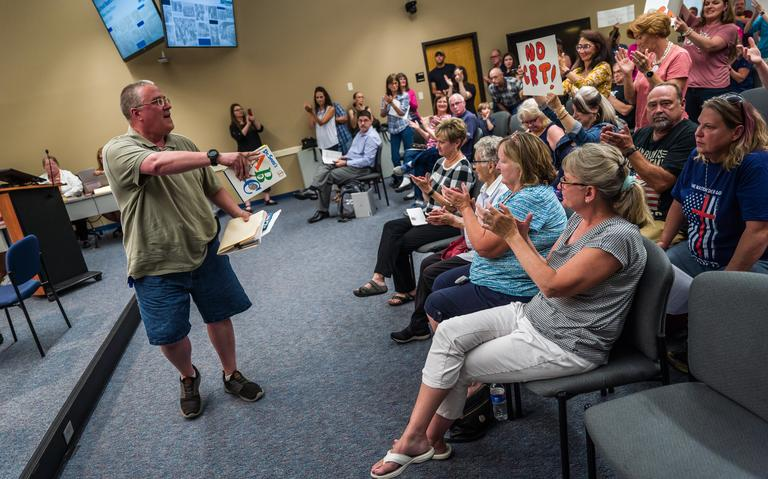 For the better part of four hours Tuesday night, residents of this Denver suburb stood at a lectern 20 feet from the seven members of the county school board, pointed their fingers and called them tyrants, sociopaths, liars and incompetents.

One armed sheriff’s deputy sat in a chair a few feet from the podium. Two more hovered near the back of the room, and several other armed security officers stood in the hallway.

The last school-board meeting before Election Day capped what has become one of the most vitriol-filled political contests in Douglas County in years, and is one of hundreds of school-board elections across the country that have turned into hard-fought political battles. Many of the elections set for Tuesday have become proxies for the larger culture war over masking mandates and the teaching of tenets of critical race theory.

In Loudoun County, Va., a school-board member resigned following threats of violence to her and her family. Florida districts are considering shortening public-comment periods at meetings, and in Kentucky a school board has asked parents to communicate through emails after board meetings became rowdy. Little of the contention is tied to the local issues such as building maintenance and teacher pay that usually animate school-board elections.

Across the 23 states that allow recalls for school-board members, 84 campaigns are targeting 215 board members, about four times greater than the 15-year average, according to Ballotpedia, a nonprofit, nonpartisan research organization based in Wisconsin.

The number of candidates running per school-board seat increased by 17% from 2018 to 2021 across the 463 school districts monitored by Ballotpedia.

Attorney General Merrick Garland ordered the Federal Bureau of Investigation to work with federal prosecutors and local officials to thwart what he called “a disturbing spike in harassment, intimidation, and threats of violence” against teachers and school staff over politically charged issues, according to a memo Mr. Garland sent this month. Republicans have criticized the directive as an effort to silence parents who speak out on topics such as mask mandates and how race is addressed in schools.

In Colorado, 530 candidates are running for seats across 178 school districts, said Pam Benigno, Education Policy Center director for the Independence Institute in Denver, a libertarian-leaning think tank. In 2017, there were just over 200 candidates.

“I have never seen anything like this before,” Ms. Benigno said.

Douglas County, a stretch of small cities and towns south of Denver, is among the fastest-growing in the nation. The affluent, mostly white population has traditionally voted Republican. Newcomers are shifting the political balance. Republicans still outnumber Democrats by about two to one, but unaffiliated voters now make up the largest segment of the county. The district has 65,000 students. The student body is 82% white, 9% Latino, 5% Asian, 1% Black, and 2% two or more races, according to National Center of Educational Statistics.

The race for four seats on the seven-member board has boiled down to two slates: One favors masking mandates and training about social equity; the other opposes masking mandates as well as social-equity lessons which incorporate the underlying principles of critical race theory.

In March, in response to public calls for greater awareness of racism and sexism in the district, the board passed an equity policy which calls for tolerance, inclusion and a focus on social justice in schools.

Kevin DiPasquale, president of the Douglas County Federation, which represents teachers and other staff, said the school board’s focus on equity has helped to give teachers freedom to “teach fact-based history so they can prepare their students for the world ahead of them.”

Many parents spoke out to object at board meetings to condemn what they said was an overemphasis on race.

Mike Peterson worked from home last year during the pandemic as his daughter took her high-school classes remotely from home. Listening in, he said he thought the classes were light on rigor and filled with too much information that he considered liberal political opinion.https://tpc.googlesyndication.com/safeframe/1-0-38/html/container.html

He started looking online to see what he could find out about the district, which led him to a video of a recent teacher training session in which he said diversity consultants explained that the U.S. was built by and for white, Christian, able-bodied, heterosexual men and that system was inherently racist.