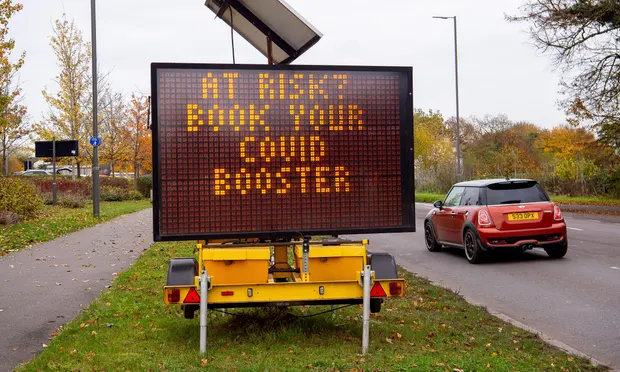 Ministers are set to require three vaccinations from those eligible for booster jabs in order to qualify as being fully vaccinated in areas where people must prove their status, such as travel or avoiding mandatory isolation.

Downing Street sources said the intention was to end up in a place where three jabs, rather than two, was the requirement to obtain a Covid pass showing full vaccination – though currently only over-40s are eligible for the booster.

If the Joint Committee on Vaccination and Immunisation (JCVI) continues to recommend boosters for all adults six months after their second jab, then the requirement could be in place in England by the early spring.

News of the plan came as England’s chief medical officer, Chris Whitty, also warned there was “major concern” about vaccination rates among pregnant women – saying 98% of severely ill pregnant women in hospital had not been vaccinated.

Speaking at a press conference on Monday, Boris Johnson said the concept of what constitutes “full vaccination” will need to be adjusted – and said that getting a third jab would become part of that.

“It’s very clear that getting three jabs – getting your booster – will become an important fact and it will make life easier for you in all sorts of ways, and we will have to adjust our concept of what constitutes a full vaccination to take account of that,” he said. “And I think that is increasingly obvious.

“The booster massively increases your protection – it takes it right back up to over 90%. As we can see from what’s happening, the two jabs sadly do start to wane, so we’ve got to be responsible and we’ve got to reflect that fact in the way we measure what constitutes full vaccination.”

A Downing Street source said it was inevitable that requirements for the digital Covid pass would need to change for travel as more countries began requiring a third dose. Currently booster doses are not displayed on the Covid pass on the NHS app, which has caused some concern over the use of the pass for travel.

In a number of European countries, third doses are set to be a requirement to prove vaccination status. In France, starting in mid-December, over-65s must have had the booster jab in order to access spaces such as restaurants and galleries or travel long distances. Other countries, including Austria, Switzerland and Croatia, have expiry dates on fully vaccination status – in effect enforcing booster jabs.

Johnson said the government was “making plans to add the booster to the NHS Covid travel pass.” He added: “If you’re thinking about that, then this is yet another reason to get it done.”

At the press conference, Whitty said there were “storm clouds” gathering over parts of Europe.

He said the UK could soon feel the effects of the new wave in central and western Europe. “We don’t yet know the extent to which this new wave will sweep up on our shores but history shows that we cannot afford to be complacent,” he said.

Whitty said the other major target for the vaccine roll-out was pregnant women who were more hesitant to have the vaccine. “I would just like to give you some fairly stark facts about this because this is a major concern,” he said.

Read more on The Guardian