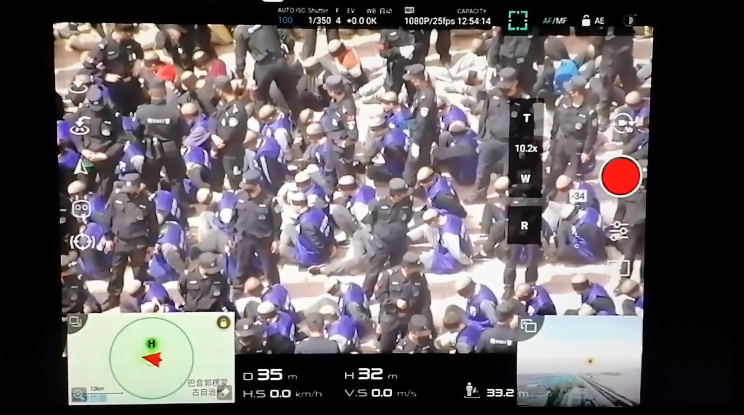 Republican members of the House Armed Services Committee are pressing the State Department to formally designate China’s suppression of its Uighur minority population as a genocide, according to a copy of the congressional communication obtained by the Washington Free Beacon.

Reps. Jim Banks (R., Ind.) and Joe Wilson (R., S.C.) say that mounting evidence indicates the Chinese government is committing genocide by forcing the country’s Uighur Muslim minority into concentration camps and using them as slave labor. The State Department is currently examining whether to classify China’s actions as genocide.

“The CCP has engaged in a systematic and widespread campaign of violence, torture, detention, forced sterilization, and enslavement of the Uighur Muslim people in [China’s Xinjiang province],” the lawmakers wrote, according to a copy of the letter sent Wednesday to the State Department. “Its actions reflect an intent to destroy, whether in whole or in part, this population.”

With its final days in office, the Trump administration could escalate tensions with Beijing by labeling its treatment of the Uighurs as genocide, a label that is rarely applied to global human rights situations and could compel U.S. intervention. Activist groups and lawmakers from both parties have pressed the outgoing administration to move forward with the designation for months, citing evidence that China is forcing the vulnerable population into work camps and worse, including reports of torture and forced abortions. Incoming president Joe Biden described the genocidal situation while on the campaign trail and could instruct his State Department to pick up the deliberations if President Donald Trump’s team fails to act.

“Our next move must be to condemn the CCP’s treatment of Muslims in Xinjiang as genocide, because that’s the word that accurately describes what has been going on there,” Banks, the Republican Study Committee chairman, told the Free Beacon. “If the world turns a blind eye to what’s going on in Xinjiang, it will embolden the CCP to do it again somewhere else.”

The issue has received bipartisan attention, with a group of senators from both parties introducing legislation late last year designating China’s treatment of Uighurs as genocide. Banks and Wilson are just the latest lawmakers to raise the issue and press for greater action. The United States has only applied the genocide label twice in its history, most recently in 2016 when the Obama administration classified ISIS as committing genocide against Christians, Yazidis, and Shia Muslims in the Middle East. The designation in China’s case would likely spark a wholesale rethinking about the U.S. economic relationship with the country.

Public reporting indicates that as many as one million Uighurs are imprisoned in labor camps and forced to work in Chinese factories, claims that have been elevated by senior members of the Trump administration, including National Security Adviser Robert O’Brien, who accused China in 2019 of operating “concentration camps.”

Banks and Wilson maintain there is more than enough evidence for the State Department to move forward with a genocide classification, arguing China “has deliberately killed, tortured, detained, and inflicted harm against the Uighur people and created conditions calculated to bring about the destruction of the Uighurs in whole or in part.”