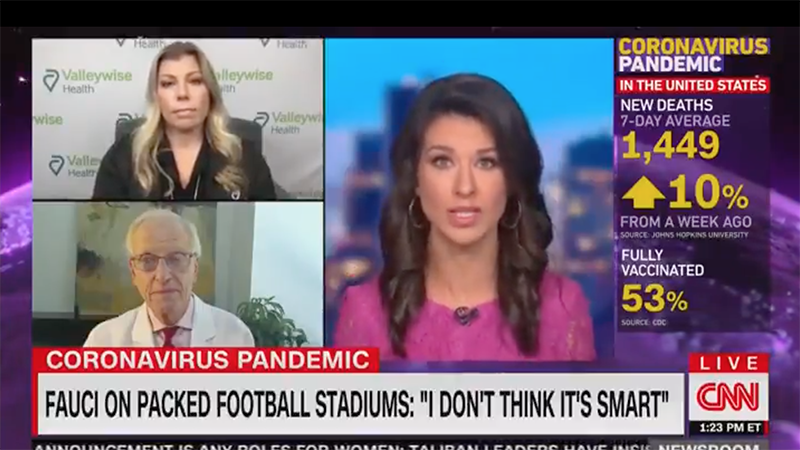 After Anthony Fauci demonized college football fans attending games and having fun, CNN weighed in with a panel of talking heads who expressed their anger about people gathering and breathing too vigorously.

CNN panelist Dr. William Schaffner declared “People are cheering and enthusiastic, exhaling with vigor; if there are people infected, they can infect people around them … Nobody was wearing a mask … I’d be very surprised if we didn’t have outbreaks.”

Fauci, meanwhile, is again under fire after a new report, published by the Intercept, revealed that Fauci’s NIH issued a “bat coronavirus grant” to a group called the EcoHealth Alliance for “$3.1 million, including $599,000 that the Wuhan Institute of Virology used in part to identify and alter bat coronaviruses likely to infect humans.”

It’s hardly new information, as Senator Rand Paul and others have been pointing out for over a year that Fauci lied about the gain of function research funding his organization provided to the Wuhan lab. 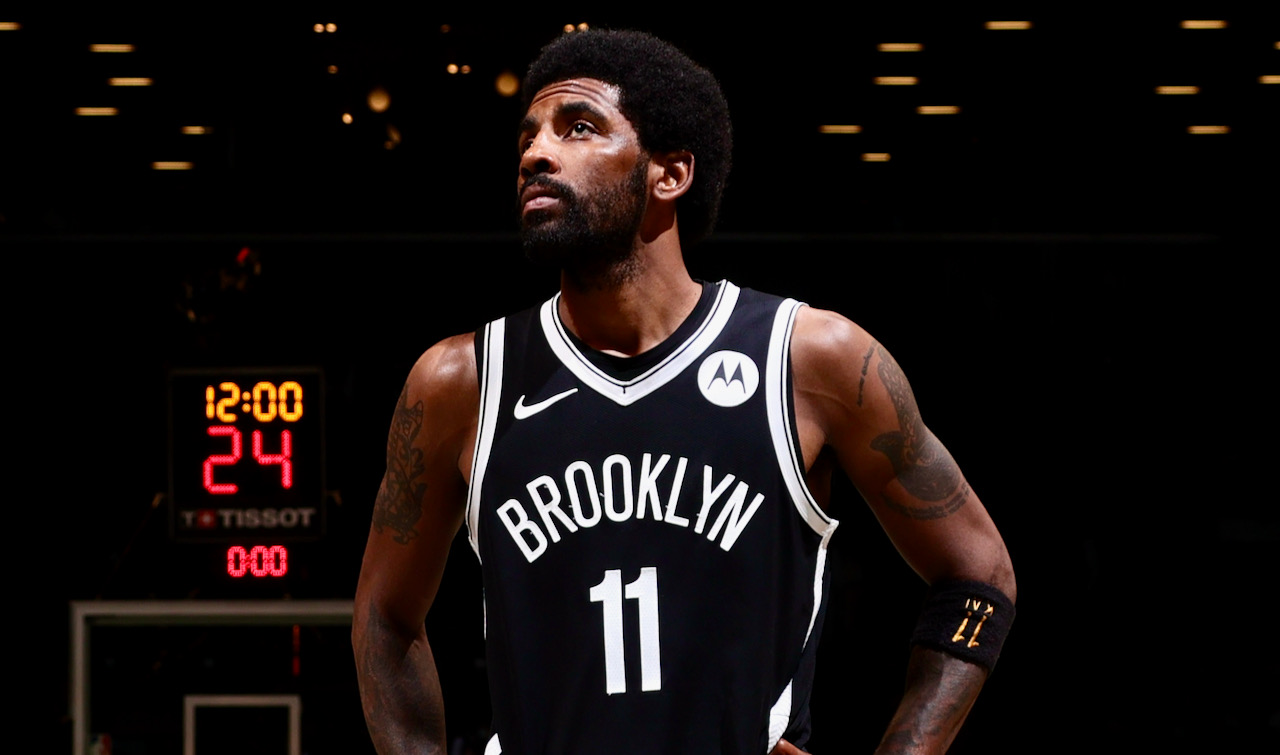 Brooklyn has told Kyrie Irving he can’t be a part-time Net.

The All-Star point guard has refused to get a COVID-19 vaccine, and the Nets announced Tuesday that he won’t be part of the team until he does. In essence, get vaxxed or get gone.

“Given the evolving nature of the situation and after thorough deliberation, we have decided Kyrie Irving will not play or practice with the team until he is eligible to be a full participant,” Brooklyn general manager Sean Marks said in a statement Tuesday morning.

“Kyrie has made a personal choice, and we respect his individual right to choose. Currently the choice restricts his ability to be a full-time member of the team, and we will not permit any member of our team to participate with part-time availability.”

Irving’s refusal to adhere to recent New York City vaccine mandates meant he wouldn’t be able to play home games at Barclays Center, or even at the cross-river rival Knicks. A recent development had allowed him to at least practice at home when the city ruled HSS Training Center a private office instead of a gym, but simply playing road games wasn’t enough.

“It is imperative that we continue to build chemistry as a team and remain true to our long-established values of togetherness and sacrifice,” Marks said.

“Our championship goals for the season have not changed, and to achieve these goals each member of our organization must pull in the same direction. We are excited for the start of the season and look forward to a successful campaign that will make the borough of Brooklyn proud.”

Jon Gruden out as Raiders coach 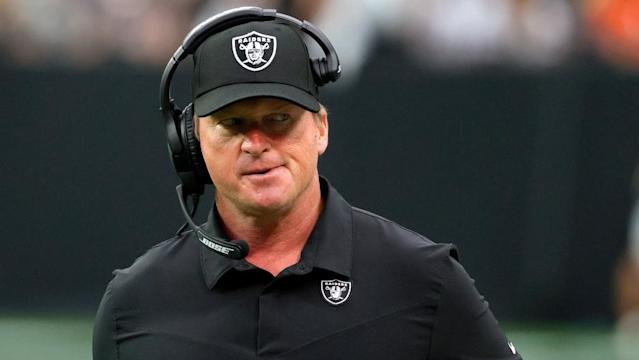 A new tranche of Jon Gruden emails was released Monday night, making it clear that the racist email he sent about DeMaurice Smith was not an anomaly.

In the emails, Gruden uses a number of misogynist and anti-gay slurs to disparage everyone from Roger Goodell to Joe Biden. He calls both men a “p—-” and Goodell a “f—–” who pushed the Rams to draft “queers” when they picked Michael Sam.

The emails were reported by the New York Times. Sam was the first openly gay player drafted by an NFL team, in 2014; Gruden’s previously reported racist email about Smith was from 2011.

Gruden resigned as Raiders coach Monday night, according to multiple reports. He coached the Raiders to a loss to the Bears on Sunday, two days after the first email was reported by the Wall Street Journal.

The emails were discovered by the NFL in an investigation into sexual harassment in the Washington front office. Gruden was exchanging emails with then-Washington GM Bruce Allen and several executives, including a founder of Hooters.

According to several reports, the NFL had flagged the emails to the Raiders last week. The Wall Street Journal reported on the 2011 email about union head DeMaurice Smith last Friday.

In that email, Gruden wrote “Dumboriss Smith has lips the size of michellin tires.” Over several non-apologies last week, Gruden claimed “I don’t have a racial bone in my body,” and said he didn’t remember writing the email.

At the time of the emails, Gruden was a broadcaster for ESPN. He returned to NFL coaching in 2018 after a decade-long hiatus. He signed a ten-year, $100 million deal to coach the Raiders, ultimately making it five games into his fourth season.

According to the Times, the disparaging and anti-gay emails about Goodell were because Gruden “disapproved of Goodell’s emphasis on safety” as the NFL dealt with growing scrutiny over concussions.

Kyrie Irving refuses to get vaccinated, and the Nets are conceding he won’t play in home games in a stunning turn of events

Kyrie Irving leaves $15.58 million on the table to stand up for what he believes in 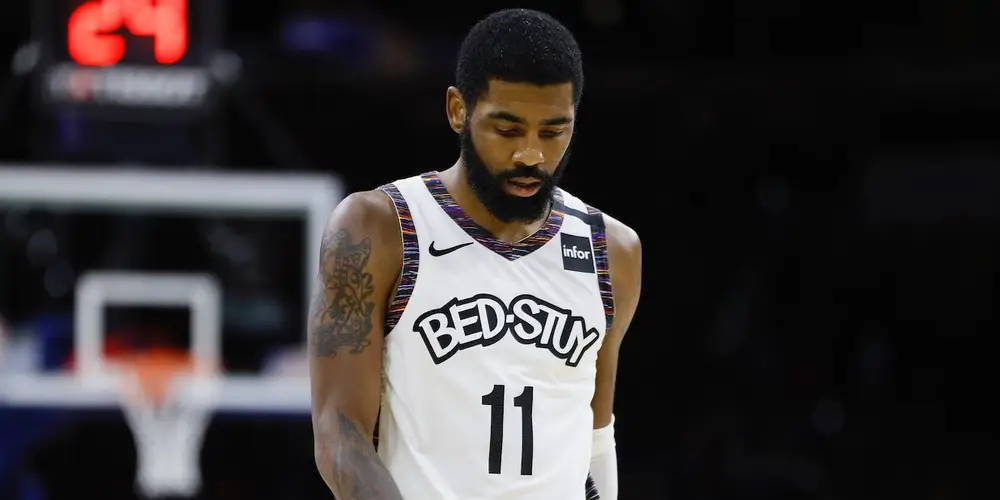 The Brooklyn Nets appear to be coming to terms with the idea that Kyrie Irving won’t play home games this season because he hasn’t received a COVID-19 vaccine.

Because of New York City’s vaccine mandates, Irving isn’t allowed to play in home games. San Francisco and Los Angeles are the only other cities with similar rules.

“I think we recognize he’s not playing home games,” Nash said, the New York Post reported. “We’re going to have to, for sure, play without him this year, so it just depends on when, where, and how much.”

It was the first public admission from the team that Irving’s situation may not be resolved when the regular season begins.

It was first disclosed that Irving wasn’t vaccinated when he wasn’t available for the Nets’ media day. He was the only player on the roster not present. When asked about his vaccination status, Irving repeatedly requested privacy over his decision.